Stay comfortable, casual and cruelty-free wearing vegan flats from our curated  collection. We've contacted all of the companies that make these flats to ensure they are all completely free of any animal-derived materials. 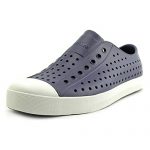 What are “vegan” flats?

Vegan flats are simply flat shoes in various styles that are made from natural and synthetic materials and textiles (including the glues and dyes used in the shoes), that are not derived from animals. They are also considered “cruelty-free” if none of the dyes, materials or adhesives used for the shoe are tested on animals.

What materials are used to make women’s vegan flats?

Vegan flats can be made from any combination of natural and synthetic cruelty-free materials, textiles and fibres, including:

Please Note: Some vegan flats made from PVC and EVA can be recycled, or are made using recycled materials

Why buy flats that are vegan?

Why harm an animal for shoes? Every conceivable style and colour of flats can be made without the use of leather, suede, crocodile skin or any other animal materials and by-products. Vegan and cruelty-free flats can pull off the same, look, feel and function as their leather, animal material-derived counterparts.

Does buying one pair of vegan flats really make a difference?

Yes, and it’s actually a very effective form of animal activism! Here’s how it works; by purchasing vegan flats, or any other ‘vegan’ product, for that matter, you’re telling retailers, manufacturers and designers that there’s demand for animal-friendly footwear; demand creates supply. At the same time, the more vegan flats leaving shelves, the more leather and suede flats left sitting on shelves. This sends the message to companies that the demand for cruelty-derived products is shrinking; with less demand for animal-derived products, less will be made!

Just like leather and suede-based flats, the cost to make vegan and cruelty-free models can vary quite a bit from one company, and one model of shoe to the next. Differences in materials and production methods can result in a wide spectrum of retail prices. Some vegan flats are quite affordable, whereas others are very expensive; most pairs fall somewhere in between.

What Styles of Vegan Flats Exist?

Should I get rid of any non-vegan flats that I already own?

This is a fairly controversial topic, and a very hotly debated one. But in our opinion, it’s up to you to decide what to do with your old, non-vegan flats; you just have to decide what you can afford, and what you’re comfortable with. Basically, your best options are to give them away or donate them, or you can keep wearing them until they’ve fallen apart or otherwise outlived their usefulness. Whatever you do, try your best to not just simply throw them into the trash if you or someone else can still make use of them.

We keep a list of women’s footwear companies that we find via social media, word of mouth, by Google searches and by other methods (Ask Jeeves), whose entire catalogue seems to be vegan. We contact these companies to check that they don’t use any animal-derived materials or by-products in the making of their flats and other footwear. If we’re convinced their shoes are suitable for vegans, and they’re listed on Amazon, then we display them here for your shopping convenience.

Yes, but it can depend on the company. If we have a hard time getting straight and consistent answers from non-vegan companies with regard to which models of their shoes are suitable for vegans, we won’t list that company’s shoes. We have to be 100% sure that everything we list on this site is vegan & cruelty-free.

Had enough of vegan & cruelty-free flats for now? Check out our similar product categories if you want to learn about or buy other vegan products:

For companies that make vegan flats

If you or your employer makes vegan flats, or any vegan product for that matter, we’d love to feature those products on our site... for free! Contact us at  - info(at)getitvegan(dot)com - to find out more!

Some of the information for this mini guide on vegan and cruelty-free flats was obtained from the following sources: